If you want your electric scooter to go faster, there are a number of ways to do it, some of them quick and easy, others a bit more complicated.

Some require no technical know-how and are achievable by anyone, like changing the tire pressure or adding a bigger engine or battery.

Others may require a bit more “geek” knowledge when it comes to electronics, like removing the speed limiter.

We will be exploring a few clever ways to increase electric scooter speeds in this article!

Before you delve head-first into making your electric scooter faster, there are a couple of things to make notes of.

From safety concerns to legal matters, these points are particularly important if you’re making any updates to your electric scooter.

Many of these rules state that electric scooters must travel at a maximum speed (e.g., 15 mph), which is something to consider. For instance, in France and UK and many states in the US, although you can operate an e-scooter with any class of driver’s license, you can only ride up to 15 mph and on a bicycle path, trail or bikeway.

Before you invest in any tools or parts to make your scooter faster, you’ll want to check with your local regulations.

Otherwise, you could be facing substantial fines and the possible impoundment of your scooter.

2. Can Your Scooter be Made to Go Faster?

Most scooters can be made to go faster, but how many speed improvements (hacks) you can give your scooter depends on whether you can access, and change, the controllers, firmware, motor, and battery.

Most units have a specific size battery to power a motor that reaches certain speeds. If you were to make any adjustments to your motor, you would also need to make sure the battery is more than powerful enough to handle it. On the other hand, you will also want to make sure you’re not investing in too large of a battery for a moderately sized motor.

As for checking to see if your scooter is speed hackable, here is a handy table:

As you can see in the table above, you really want to first check to see if your scooter has the parts (e.g., controllers, battery pack) that are accessible and removable.

How to Make an Electric Scooter Go Faster

Now that you are aware of the most important things to consider before making any upgrades, let’s get into the different projects you can do to make your scooter faster.

There are several options you have available, depending on the model of your scooter and the features it possesses.

An electric scooter can reach a much higher speed than you can imagine, but behind the scenes it is being inhibited from its true speed potential by an inbuilt (and hidden) speed limiter.

The speed limiter is coded into the controller (the e-scooter brain), telling it how fast to power the motor.  The manufacturers put these speed limiters in for three reasons: 1) to prevent the rapid loss of battery charge and corresponding range reduction caused by the greater power demand of higher speeds; 2) to prevent the burnout of the motor and controller operating at increased power requirements; and 3) to comply with different countries’ laws prohibiting these machines from running at higher speeds. More than 40% of scooters sold globally in 2021 were limited with a speed limiter to comply with local speed regulations, such as max scooter speed of 15 mph in France, United Kingdom and many states in the USA.

If you are not so worried about complying with local speed laws, and you desire to realize the full potential of your electric scooter, just remove the built-in speed limiter.

You should be aware that there are two types of speed limiters on any electric scooter: Hard wired and firmware.

The hard-wired speed limiter is usually a wire that connects between the throttle and controller and limits the controller’s power to the motors. When the wire is removed or unplugged, then you will effectively remove all power limitations from the controller.

You should investigate whether your scooter has a hard-wire speed limiter, and if it does, you can remove it to unlock extra speed power.

The firmware speed limiter will usually be implemented at a control panel level or LCD panel or in the controller’s software.

On electric scooters below $500-$1000 with very basic LCD panels, you’re more likely to unlock the firmware limiter via software flashing over bluetooth apps. For instance, the XIAOMI M365 can be unlocked via this method, and the scootertalk forum discuses how this can be done.

It’s best to refer to your manufacturer’s instructions, or consult some worthy forums, to determine which method is best for your model. You can visit the scootertalk forum to learn from fellow speed hackers how to identify the controller and remove it.

The battery on your scooter is responsible for pushing power to the motor, and with insufficient battery life, it’s not going to move quickly.

This event is particularly noticeable once your scooter starts to die, as you’ll begin to notice substantially slower speeds with a lower battery charge.

A great way to improve speeds is to enhance the size of your battery.

It is the battery and motor in combination that can determine the scooter’s speed. The voltage differs from one model to another, but the 24-volt battery is the most common. In most cases, you just need to replace the current battery with a more powerful battery, such as a 48-volt battery.

You’ll also be glad to know that improving your scooter’s battery is easier than trying to remove the speed limiter.

All you have to do is find another battery that has a substantially higher charge reserve than the one you currently have.

However, you will need to pay attention to what batteries are compatible with the type of motor you have in your scooter.

If you were to purchase a battery that is far too strong for your motor, you could burn out the engine, causing you to have to replace it as well.

You can typically find 24- to 48-volt batteries for electric scooters, and depending on the wattage of your motor, you can find the ideal pairing.

For example, you wouldn’t want to invest in a 48-volt battery for a 200-watt motor, as there will be far too much power not being used.

Another alternative method you can use to improve the speeds of your scooter is to add a second battery instead of replacing your existing one.

If you find that the voltage from a replacement battery still isn’t enough, it’s relatively simple to add another battery to your scooter.

It’s important to note that adding another battery to an existing one that functions well isn’t going to make a substantial difference.

Instead, all a second battery will do is allow your scooter to hold its maximum speed for a longer time.

Many commuters find that adding a second battery helps them to get a far better charge out of their scooters for long-distance trips.

One of the most common ways you can improve the speeds of your scooter is to enhance its motor.

Just like your battery, there are several different types of motors with various capacities to choose from.

You might be able to find inexpensive motors with 200 watts, whereas others can get up to 8000 watts.

Depending on your personal preference, you may find that designs topping out at 2000 watts will give you more than enough speed without being too overbearing.

Also, similar to replacing the battery, you’ll want to make sure your motor is rated adequately for the power you have on the scooter.

For example, a 24-volt battery isn’t going to be sufficient enough to power a 2000-watt scooter, so you’d be better off finding a 48-volt battery for this pairing.

Unfortunately, if you add an overpowered motor to your existing rig, you might burn out the batteries as soon as you start the scooter.

It also puts you at risk for fire hazards, which is why it’s always best to opt for batteries and motors that are on an equal level.

Not everyone is interested in finding new mechanical fixtures to add to their electric scooters, especially if you’re a beginner.

This point is especially true when it comes to working with scooter’s software to disable its controller.

Instead, you can gain a couple of extra miles per hour if you improve the aerodynamics of your scooter.

First, you’ll want to inspect your unit and determine if there are any added features that you don’t find necessary.

For example, a luggage rack or a basket on the back of the scooter can reduce your top speeds.

The main point of this task is to make the scooter as lightweight as possible so that it can travel easier without having to worry about heavier loads.

It’s also essential that you pay close attention to the weight limits of your scooter, as riders with gear that is over the limit can negatively impact the performance of your unit.

There’s a general rule of thumb when it comes to analyzing the performance of your scooter.

Most riders suggest you’ll never know its real power unless you’re riding over smooth and straight terrain that isn’t on an incline or decline.

With that said, another easy way to get maximum speeds is to find better ways to get to and from wherever you travel to.

Instead of taking rugged trails, why not opt for paved bike paths that will take the pressure off the tires on your scooter?

You may also want to consider alternative routes that don’t have steep hills, as electric scooters are known to be insufficient while traveling uphill.

There are plenty of options in your area to help you find the best ways to commute without compromising the strength of your scooter.

Anyone can learn how to make an electric scooter go faster, even if you’re not mechanically inclined.

With the help of our tips, you can quickly improve your speeds so that you can get more out of one of your favorite devices. Finding the right electric scooter can be tough, so when you do find the best one for your needs, you want it to run correctly. Often,… How do electric scooters work? This is a prevalent question, especially in metropolitan areas. As one of the most efficient and convenient ways to get… If you know that you need help getting around, an electric scooter is the best choice. You’ve worked hard to find the right one and have practiced… It’s important to ask how much does a scooter weighs since it can make or break how easy it is to commute with it. Even… Have you ever wondered how fast do electric scooters go? These unique devices seemingly come in a wide variety of shapes and sizes. You can… 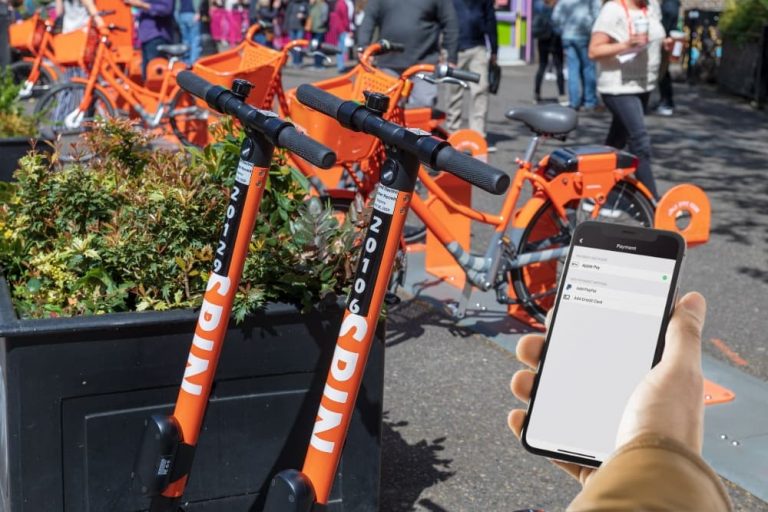 If you’re like us, you probably see people zipping around town on the Spin electric scooters and think, “I need one of those!” But then…