-  Sun Apr 19, 2020 7:40 pm #20665
I have an ex rental Spin Max thats not cooperating. When I plug the dash in with st-link it lights up for one second and beeps then it goes dark. I flash the BLE555 and it says it's programmed successful but when i plug it into the scooter i get nothing.

I also flashed the BMS and the controller via st-link successfully but still nothing.

from what i read the dash dosent need to be flashed for spin... am i wrong here... also is the battey flashing necessary?

-  Sat May 16, 2020 6:45 am #20982
I have a Spin max g30. I have flashed the dash controller and battery but the dash just shows blank. It still beeps. I am unable to connect to it with ninebot flasher or Ninebot app. It just connects and then times out - everything is grayed out. 3 days of troubleshooting please help

nmaj wrote: ↑
Mon Oct 21, 2019 4:01 pm
I successfully converted a max last night using a generic controller with the s866 lcd display. Working on raising the current top speed from around 15. Used the link below from amazon. Definitely cheaper versions available, but can't beat their return policy.

u dont have prblme with bypass ? 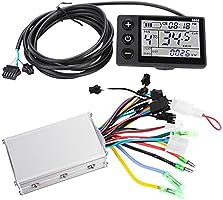 Is it possible to use ES4 dashboard/handlebars on a Ninebot MAX / Lyft for riding also, not only flashing?

-  Sat Jun 27, 2020 11:30 pm #21655
As promised, I got my Lyft Max working with an aftermarket 1,000W Brainpower controller, using the stock throttle To view images REGISTER or LOGIN for full access. , and it goes 21 mph on level ground. I am planning to overvolt it to 48 volts but not really sure I want to go any faster. It seems pretty fast already but I haven't really used it much due to Covid and wanting to drive everywhere instead. Maybe when I cruise on it for 20 miles at a time, I'll change my mind.

-  Sun Jun 28, 2020 12:50 am #21660
Not sure if anybody is interested in this info but I think sharing info is good and I learned a lot from other users on this forum so I'll just rapid fire things I have found along the way to getting this scoot running.

Keep in mind the bms behavior is how it works alone, without the normal oem dashboard or oem controller hooked up to it. I've read they work differently when using stock oem components with them.

-The Lyft bms didn't allow enough current when hooked up to a 1,000 watt controller with a 38 amp current limit. At full throttle, it would shutoff and recover maybe five seconds later. If I kept the throttle pinned, it would shutoff completely and I would have to disconnect the battery for it to work again. I bypassed the bms doing this and it doesn't cut out anymore. To bypass the bms during discharge, I cut off the bms negative wire at the bms, then soldered that wire directly to the battery negative wire to give me a direct connection from the XT60 to battery negative. Since the charge wires are separate, charging with the bms should be unaffected and it should still balance the cells like normal. But there is no longer any over-current or over-discharge protection from the bms.
To view images REGISTER or LOGIN for full access.

-I also tried a Spin battery. It would not run for more than 5 seconds before shutting down with any throttle setting. Bypassing the bms solved that problem as well. The Spin bms only charges up to 40.3 volts, which I gather is about 90% capacity. The Lyft battery charges up to 41.4 volts which seems like 100%. The lower voltage of the Spin battery also reduced top speed to 20 mph and it seemed a little less peppy during acceleration.

-If anyone reading this uses a Brainpower controller, use the learning wires. I hooked up mine without the learning wires and it spun forward so I thought it was good but the phase wires or Hall sensor wires were wrong. It made a horrible vibration but still spun pretty fast. After troubleshooting and hooking up the learning wires, the controller electronically fixed the miswired phase or Hall wires and it was as smooth as a trapezoidal controller gets. Still not sinewave smooth or quiet but there is tons of torque.

-My Brainpower controller had 3 speed settings and they all worked and made a noticeable difference. It is on the fastest setting now and I doubt I will ever change it. I tested the stock Lyft Max throttle and it was able to get full output from the controller easily.

I used 12 gauge solid copper romex wire for the power and phase wires and they seem to be large enough for the current demands.
Last edited by landshark on Tue Jun 30, 2020 3:34 am, edited 3 times in total.

-  Mon Jun 29, 2020 9:22 am #21839
to anyone considering doing this but putting it off for some reason i would highly recommend buying a frame programmer to do it. no soldering needed you it makes things about 5x faster and less frustrating if you cant solder like me.

also in the controller step i actually didnt have to hit control + B to disable readout protection. it wouldnt work until i skipped that step.

and last thing i bought a clone board off ebay from scooterclone and you dont have to solder to the board you can just flash it with bluetooth.

@Teslaguy hey can you inbox me. I had a questio[…]

I found a set on alibaba that are solid. I may buy[…]

I'm gonna bury a little hint here that will save l[…]

use High-quality drill bits for metal.. My Bosch C[…]